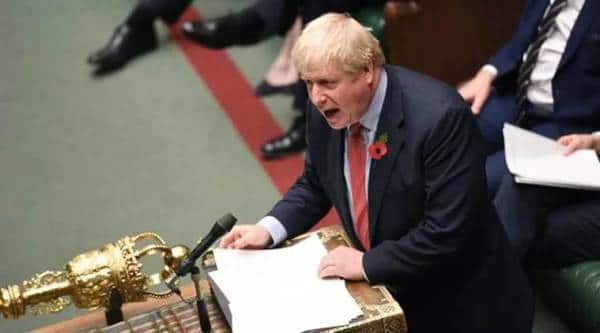 An influential committee of lawmakers plans to deliver its findings to Parliament after staving off what many observers saw as a last-minute effort to once again stall the report, which was originally submitted to Johnson on October 17.

A report on Russian interference in British politics will finally be published on Tuesday amid criticism the government delayed its release for more than six months to shield Prime Minister Boris Johnson and his Conservative Party from embarrassment.

An influential committee of lawmakers plans to deliver its findings to Parliament after staving off what many observers saw as a last-minute effort to once again stall the report, which was originally submitted to Johnson on October 17.

The government initially said the report couldn’t be published until it was reviewed for national security issues, which postponed release until after the December 12 general election. Further holdups were caused by delays in appointing new members to the Intelligence and Security Committee.

Finally, Johnson named five Conservative lawmakers to the nine-person panel in hopes his handpicked candidate would be chosen as chairman and block the report. The gambit failed when a renegade Conservative was chosen to head the committee with backing from opposition parties.

“Completely self-defeating act that bears the hallmark of a government so arrogant it really believes it is above scrutiny”, Lisa Nandy, the opposition Labour Party’s spokeswoman on foreign affairs, tweeted. “What is in the Russia report that Johnson doesn’t want to see the light of day?”

Labour has accused the government of failing to publish the report because it would lead to further questions about links between Russia and the pro-Brexit campaign in the 2016 referendum on European Union membership, which Johnson helped lead.

Another parliamentary panel – the Digital, Culture, Media and Sport Committee – previously published the results of its own inquiry into disinformation and “fake news”, which called on election regulators and law enforcement to investigate reports that a British businessman with links to Russia donated 8.4 million pounds ($10.6 million) to the Brexit campaign.

The National Crime Agency said in September that it found no evidence of criminal offenses related to the donation.

The intelligence committee report covers the full range of the Russian threat to the UK, including election interference, espionage and targeted assassinations such as the attempt to kill former spy Sergei Skripal in the English city of Salisbury two years ago, said Dominic Grieve, who chaired the panel until he left the House of Commons after the election.

The government’s explanations for delaying the report “are simply not credible”, Grieve said in an interview with Britain’s Channel 4 News.
“I hope that when it comes out … it will be useful and informative to the public, which is what it was intended it to be when we were trying bring it out at the end of October, early November”, he said.

The report’s release comes only days after Britain, the United States and Canada accused hackers linked to Russian intelligence agencies of trying to steal information from researchers working on a potential coronavirus vaccine.

“The government hasn’t been reticent about calling out other cases of Russian influence operations, including attributing cyber-operations to Russia”, Nigel Gould-Davies, senior fellow for Russia and Eurasia at the International Institute for Strategic Studies told The Associated Press. “Why the reluctance to bring evidence of political funding into the public domain?”