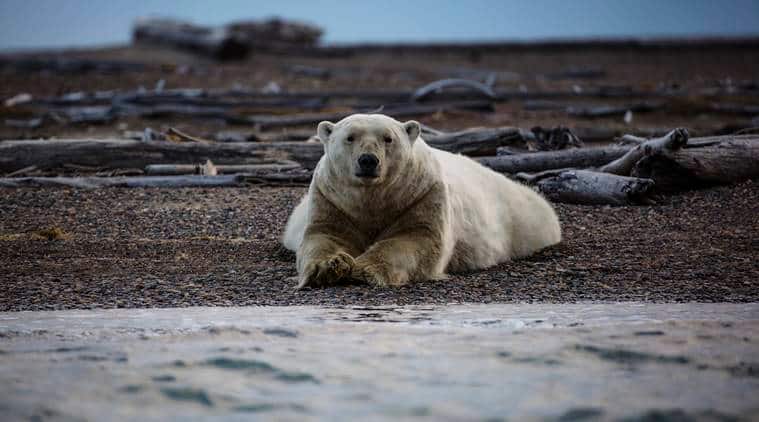 A polar bear in Kaktovik, Alaska, Sept. 11, 2016. Polar bears could become nearly extinct by the end of the century as a result of shrinking sea ice in the Arctic if global warming continues unabated, scientists said Monday, July 20, 2020. (Josh Haner/The New York Times)

Polar bears could become nearly extinct by the end of the century as a result of shrinking sea ice in the Arctic if global warming continues unabated, scientists said Monday.

Nearly all of the 19 subpopulations of polar bears, from the Beaufort Sea off Alaska to the Siberian Arctic, would face being wiped out because the loss of sea ice would force the animals onto land and away from their food supplies for longer periods, the researchers said. Prolonged fasting, and reduced nursing of cubs by mothers, would lead to rapid declines in reproduction and survival.

“There is very little chance that polar bears would persist anywhere in the world, except perhaps in the very high Arctic in one small subpopulation” if greenhouse-gas emissions continue at so-called business-as-usual levels, said Peter K. Molnar, a researcher at the University of Toronto Scarborough and lead author of the study, which was published Monday in the journal Nature Climate Change.

Even if emissions were reduced to more moderate levels, “we still are unfortunately going to lose some, especially some of the southernmost populations, to sea-ice loss,” Molnar said.

The fate of polar bears has long been a flashpoint in the debate over human-caused climate change, used by scientists and environmentalists as well as deniers in their arguments.

By rough estimates there are about 25,000 polar bears in the Arctic. Their main habitat is sea ice, where they hunt seals by waiting for them to surface at holes in the ice. In some areas the bears remain on the ice year round, but in others the melting in spring and summer forces them to come ashore.

“You need the sea ice to capture your food,” Molnar said. “There’s not enough food on land to sustain a polar bear population.” But bears can fast for months, surviving on the energy from the fat they’ve built up thanks to their seal diet.

Arctic sea ice grows in the winter and melts and retreats in spring and summer. As the region has warmed rapidly in recent decades, ice extent in summer has declined by about 13% per decade compared to the 1981-2010 average. Some parts of the Arctic that previously had ice year-round now have ice-free periods in summer. Other parts are now free of ice for a longer portion of the year than in the past.